Now available-- signed copies of the new paperback edition of SOMEDAY I'LL LAUGH ABOUT THIS. Pick yours up at Mari's Books And... next to the grocery store in Yachats, Oregon, the setting for this story.

Our family cabin in the 1930s. My mother is the little girl sitting in the middle on the front step.

I got an early start going to the beach at Yachats. Here I am with my cute mom, who confessed to me recently that I actually got my very beginning right there in the cabin in front of the fireplace. (!!!) 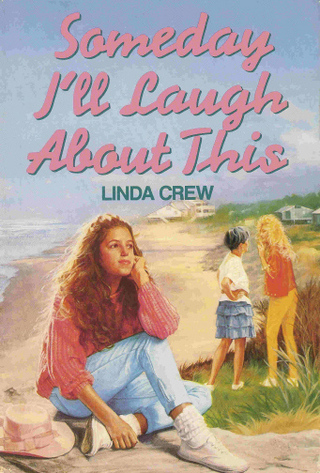 Cover design for the hardback original

Someday I'll Laugh About This is a book which began with a setting. I wanted to write about our little cabin in Yachats, Oregon, which has been in our family since my grandfather bought it during the Depression. So many good times have been logged there over the years.

In writing about Shelby's problems of adolescence, I was actually remembering my own. My oldest son was only five at the time I was working on this and my twins were yet unborn. By the time they were all reaching Shelby's age, their stories were off limits for my books anyway!

I name the town Perpetua in the book, but it's actually Yachats the way it used to be. The issue of the Historic 804 Trail forms a subplot in the book. It pleases me now that the trail is a done deal, and frequently mentioned as an attractive amenity for tourists. People probably don't realize how hard we had to fight to keep the trail open to the public when so many adjacent landowners wanted to close it off.

Five-year-old cousin Brandon was based on my son, Miles. Here he's dressed for Halloween as Luke Skywalker with his glow-in-the-dark, plastic "I-Have-the-Power" light saber. Remember those? This was when Star Wars was popular the first time around.

"Brandon" and his beautiful wife this past Halloween. He still has the power!

I call the cabin Sea Haven in the book, but the actual place has always been Ocean Crest. My mother made this sign when doing mosaic crafts was popular in the 60s.

"Crew pilots Shelby through these troubled waters with good humor and a steady hand...Underlying everything is the story's celebration of family and its capacity to support and sustain even in the midst of squabble and irritating idiosyncrasies. An engaging look at adolescent problems." --Booklist

"The author of Children of the River has created a wonderfully complex character in Shelby...Crew invigorates her plot with a fully realized setting, people who interact with the grace of real family members, and teenage concerns that--though not new--are refreshingly restated."--Kirkus

"With insight and sensitivity, Crew captures the pain of growing up, along with its inherent humor. Lively, believable characters, universal experiences and Shelby's own honest narration of her summer highlight this uplifting story."--Publisher's Weekly

Another of my mother's projects, the infamous trout table, gets mentioned in the book. We used to joke that it was the only thing holding the cabin down in the high coastal winds.

New generations continue to enjoy the family place at Yachats
Wedding in Yangshuo: a Memoir Love, Language, and the Journey of a Lifetime to the Heart of China
A companion book to Children of the River, a travel story about a family wedding in China, a writer's personal account of the twists and turns on the road to becoming a writer, a wife, and a mother......Pick up Wedding in Yangshuo and read it any way you want.
Accidental Addict: a True Story of Pain and Healing....also Marriage, Real Estate, and Cowboy Dancing
The author's memoir about her inadvertent addiction to and recovery from doctor-prescribed opioid painkillers and the benzodiazepine Xanax.
Brides of Eden: A True Story Imagined
A mysterious man tears a small town apart with his seductive new religion.
A Heart for Any Fate: Westward to Oregon 1845
A spirited young woman joins her family in an overland journey to Oregon that will test each one of them to the limits of their faith and endurance.
Children of the River
In in the wake of the Cambodian holocaust, a young Khmer girl struggles to make a new life in the United States.
Fire on the Wind
An eighteen-mile wall of fire is roaring toward Blue Star, the logging camp where 13-yer-old Storie lives with her family. Can they get out in time?
Long Time Passing
Against a backdrop of the 1960s, high school sophomore Kathy Shay wants to establish her own identity and connect her life with the turbulent world around her.
Someday I'll Laugh About This
Thirteen-year-old Shelby has always looked forward to vacations at the family's beach cabin, but this year, everything's different. Everything's wrong.
Nekomah Creek and Nekomah Creek Christmas
Robby Hummer loves his family, even if they are somewhat unusual...
Ordinary Miracles
Betsy Bonden longs for a baby. Why does this "ordinary miracle" that seems to come so easily to others continue to elude her?